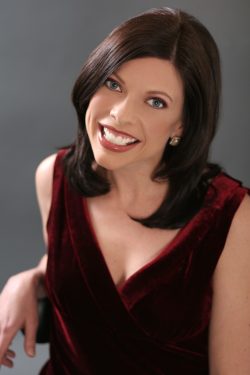 With over 75 productions to her credit from grand opera to musical theatre, Vicki Fingalson has been acclaimed for her “luscious sound and comedic sensibility”, as well as her “soaring soprano” and “powerful voice”.

Recently, Vicki performed the role of Mother in Amahl and the Night Visitors with Skylark Opera Theatre (2021) and Lyric Opera of the North (2020).  She is thrilled to be performing the Witch in LOON’s 2022 production of Hansel and Gretel!

Vicki has performed several times with the Minnesota Orchestra in roles such as Marianne (Der Rosenkavalier), First Lady (The Magic Flute), and Sandman/Dew Fairy (Hansel and Gretel).  Other national performances include Musetta (La Bohème) with West Virginia Symphony, Colorado Opera Festival, and Colorado Lyric Theatre; the Witch (Hansel & Gretel) with the Jacksonville Symphony (FL); Nedda (I Pagliacci), Lauretta (Gianni Schicchi), and Valencienne (The Merry Widow) with Western Plains Opera; Sandman/Dew Fairy (Hansel and Gretel) with the Colorado Symphony; Dircea/Giulietta cover (Casanova’s Homecoming) with The Minnesota Opera; and, was featured in Oh, Coward! at the Hanifl Performing Arts Center. As a regular with Skylark Opera, she was featured in Berlin to Broadway with Kurt Weill, Sondheim’s Putting It Together, and performed the roles of Hanna Glawari (The Merry Widow), and Katherine (The Vagabond King), among others.  In addition, she has been broadcast numerous times on Minnesota Public Radio in live, concert, and pre-recorded performances.

In addition to several appearances with Lyric Opera of the North, Vicki has performed locally with the Duluth Playhouse as Tanya (Mamma Mia!), Winifred Banks (Mary Poppins) and Claire (Rumors), and at the Underground Theater in Oh! Coward and the title role in Iolanthe.  She has performed as Soprano Soloist in Mendelssohn’s Elijah with the Duluth-Superior Symphony Orchestra, and premiered It Rained on Shakopee with Lake Superior Chamber Orchestra. As part of the NorShor Concert Series, she performed in Dancing Queens, as Victoria in A Grand Night for Singing!, and Ashley in Irving Berlin’s Rags to Ritzes.

Vicki serves as Professor of Voice and Director of Opera Workshop at University of Wisconsin-Superior.

For more on Vicki, including upcoming performances, visit: www.vickifingalson.com