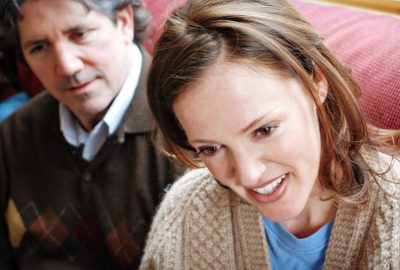 Calland Metts and Sarah Lawrence decided to make Duluth their home after performing with Colder by the Lake in the smash hit, Les Uncomfortables in 2001. They had been living in Chicago, where Cal was singing with regional opera companies and symphonies as well as with the Lyric Opera of Chicago’s chorus, and Sarah was beginning a professional singing career with regional companies, as well.

Since moving to Duluth, they have continued to perform with theatres, opera companies and symphonies around the U.S. Sarah also spent several years on the national tour of The Phantom of the Opera.

When Ruth Jacobson founded Lyric Opera of the North, she hired Sarah and Cal to sing the roles of Pamina and Papageno in The Magic Flute. Since then they have appeared with the company in other roles, and after Ruth’s death in winter of 2010, Cal and Sarah were asked to share the role of General Artistic Director for LOON.

Local audiences may have seen Sarah & Cal in productions at The Duluth Playhouse and Lyric Opera of the North, and in concerts with the DSSO. Regionally, they have appeared with Wisconsin Chamber Orchestra, Omaha Symphony, Skylark Opera Theater, Minnesota Orchestra, Guthrie Theater, and the Minnesota Oratorio Society. Sarah and Cal live in Duluth with their daughter, Giulia Grace, who is a self-appointed Junior Executive Director, production team member, and frequent on-stage collaborator with Lyric Opera of the North.