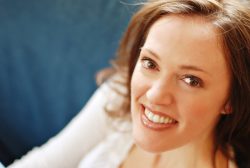 Sarah Lawrence enjoys a widely varied career as a singing actor in opera, musical theatre, and in concert, singing everything from Baroque to Broadway.

Equally comfortable on the stage, Ms. Lawrence has performed the role of Gretel in Hansel & Gretel, Frasquita and Micaela in Carmen, and Fiordiligi in Cosi fan tutte. She has appeared with Madison Opera, Skylark Opera, Light Opera Oklahoma, Opera Omaha, and the Guthrie Theater. With Lyric Opera of the North she has appeared in the title role in Handel’s Semele, Pamina in The Magic Flute, Norina in Don Pasquale, and Rosina in The Barber of Seville. With Colder By the Lake, she created the roles of Missy in Les Uncomfortables by Tyler Kaiser, and Pristine in Phantom of the NorShor. A huge fan of Gilbert & Sullivan’s operettas, Sarah has appeared as Rose Maybud in Ruddigore, Angelina in Trial by Jury, Yum-Yum in The Mikado, and Mabel in The Pirates of Penzance. Musical theatre roles include Eliza Doolitte in My Fair Lady and Lily in The Secret Garden with The Duluth Playhouse, and Ivey Smith in On the Town Eileen in Wonderful Town with Skylark Opera. Ms. Lawrence appeared as Christine Daaé as a member of the Third National Tour of The Phantom of the Opera and in Phantom: The Vegas Spectacular.

Recent engagements include Beethoven’s Symphony No. 9 with Augusta Symphony Orchestra, Messiah with Wisconsin Chamber Orchestra, and a turn as Gilda in Rigoletto. Upcoming engagements include a pops concert with the San Luis Obispo Symphony, and an appearance with Oratorio Society of Minnesota as Gloria in The Greatest Generation. Sarah makes her home in Duluth with her husband, Calland Metts and daughter Giulia Grace. For more information about Sarah Lawrence or her CD, Sweet Hello, please visit sarahelawrence.com.