All News > Library of Congress Induction 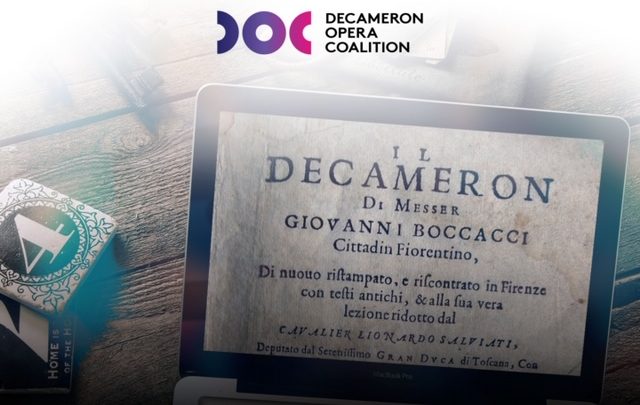 The award-winning new opera series will be remounted for world-wide streaming on the IDAGIO Global Concert Hall beginning February 21.

The most ambitious operatic commission to emerge from the global pandemic, the Decameron Opera Coalition’s Tales from a Safe Distance has been invited into the Library of Congress’ Performing Arts Covid-19 Response Collection. This new collection will include works by nationally and internationally renowned creators to document the new work that performing artists created during the pandemic.  This recognition comes just as the DOC launches a new partnership with IDAGIO, the leading streaming app for classical music, where Tales from a Safe Distance will be remounted in the Global Concert Hall with “DOC Week”.  The four episodes will be released throughout the week of February 21-27 for audiences to enjoy in 160 countries worldwide. One $15 ticket gives unlimited access to all four episodes through December 31.

Tales from a Safe Distance is a 21st century operatic adaptation of Boccaccio’s 14th-century Italian masterwork The Decameron: the tale of ten people quarantined together outside of Florence during the Black Plague. To pass the time, these friends tell each other stories.  The 9 indie opera company members of the Decameron Opera Coalition reimagined these stories for our own pandemic times, each with a unique team of creators and artists.  The idea originated with composer Peter Hilliard and librettist Matt Boresi, who together created the tenth wraparound story, “The Happy Hour”, featuring one character-storyteller from each of the other 9 tales, and a special guest star, the world renowned bass-baritone Luca Pisaroni.  The result was an unprecedented operatic co-creation – a new opera, straight to film, that is an anthology of 10 world premieres written by 10 creative teams, and engaging a total of 86 artists from around the world.

Tales premiered in four episodes in October 2020 to rave reviews: called an “ingenious project” by the Wall Street Journal, and “an unbridled success – edgy, novel, richly detailed, musically intriguing” by the Houston Press.  The series originally streamed through December 31, 2020 to an audience on 6 continents, in 17 countries, and 42 states, and has been recognized with several awards: 2020 “Freddie” Excellence in Opera Award from Fred Plotkin ~ WQXR New York Public Radio, OperaWire’s list of Industry-Defining Moments of the Year, and Winner of ‘Best Collaboration’ from 360° of Opera®.

The Library of Congress is building its Performing Arts Covid-19 Response Collection with “original scores, scripts, and choreography inspired by quarantine and the pandemic, the contextual documents surrounding the creation and planning of these works, and a brief oral history with creators.”  In addition to scores, libretti, the production videos, and planning documents, the DOC’s submission of archival materials will also include the series of artist, creator, and producer conversations that were live-streamed by the Coalition through the fall of 2020. These insightful behind the scenes “Afterparty” and “Happy Hour” events are currently available on the DOC’s YouTube channel.

ABOUT THE DECAMERON OPERA COALITION (DOC)

The coalition members commission teams of contemporary opera’s most vital and diverse creative voices to illuminate America’s indispensable indie opera scene, with a dedication to new sounds, unparalleled storytelling, and underrepresented voices. Independent opera companies are where new audiences are born, where seasoned opera appetites are fed, where new work is incubated, and where the craft is nurtured. The Decameron Opera Coalition is the future of opera.

Episode 1: Both Gladsome and Grievous

– “Everything Comes to a Head” (Lyric Opera of the North)

Episode 3: So Noble a Heart

– “Seven Spells” (Opera in the Heights)

– “The Sky Where You Are” (An Opera Theatre)

Episode 4: The Bolts of Fortune