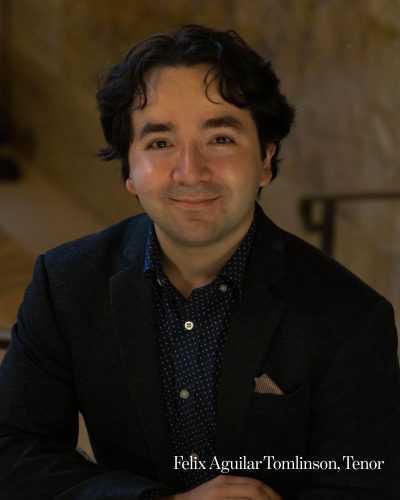 Felix Aguilar Tomlinson is a Mexican-American lyric tenor from Minneapolis, MN completing his Graduate Performance Diploma at the Boston Conservatory. Felix has performed extensively in Boston and Minnesota, excelling in roles that are colorful, sympathetic, and demanding—musically, dramatically, and vocally. At the Conservatory, Felix has performed the roles of Tito in La Clemenza di Tito, Peter Quint in The Turn of the Screw, Ernesto in Don Pasquale, Younger Thompson in Glory Denied, The Magician in The Consul, L’Aummônier in Les Dialogues des Carmélites, and covering the roles of Father Grenville in Dead Man Walking and Lenski in Eugene Onegin. Active in the musical theatre and opera scene in Minnesota, Felix has performed several roles including Logan in The Frat Party (Really Spicy Opera), Monastatos in Die Zauberflöte (Lakes Area Music Festival), Lamar in Godspell (Theatre in the Round Players), Ralph Rackstraw in HMS Pinafore (The Minneapolis Pops Orchestra) and The Defendant in Trial by Jury (Gilbert & Sullivan Very Light Opera Company). In Boston, Felix has been hired as a chorister for the Boston Lyric Opera, Odyssey Opera, the Boston Pops with the Metropolitan Chorale, and the Boston Youth Symphony Orchestras.

Dedicated to the performance and production of new works, Felix is a founding member of Strange Trace – a fledgling opera company that commissions new digital works of opera from around the world. In addition to his duties as a performer, Felix has been able to explore his passion for directing, filming, and producing in the seven new works he has created with them since autumn 2020.

Upcoming engagements for Felix include performing the role of Albert in Albert Herring on the Boston Conservatory’s mainstage in March, followed in April with his singing John Adams in Adolphus Hailstork’s Crispus Attucks in Boston’s Symphony Hall with the Boston Conservatory Chorus and Orchestra. This summer, Felix has been contracted as a Resident Artist at the Chautauqua Opera Company where he will be singing the tenor roles in Kamala Sankaram’s Thumbprint, and Thaddeus Stevens in Virgil Thompson’s The Mother of Us All.