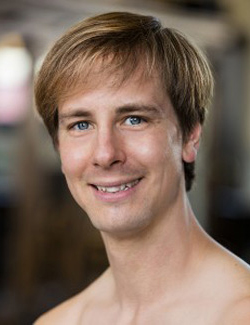 He danced thirteen seasons as a member of the Minnesota Ballet company. There, he has performed such roles as Theseus in Robert Gardner’s A Midsummer Night’s Dream, Prince and Cavalier in both Allen Fields’ present and previous productions of the Nutcracker, Prince Charmant in Gardner’s Sleeping Beauty, Franz in Fields’ Coppelia, Duke Albrecht in Giselle, Act II, Von Rothbart in Swan Lake and The Count in Gardner’s Dracula. He has performed Clowns and Others by Salvatore Aiello, Valse Fantaisie and Who Cares? by George Balanchine, Continuo and Little Improvisations by Antony Tudor, Three Virgins and a Devil by Agnes de’ Mille, Five o’Clock Fox Trot by Ginger Thatcher, Two Andantes by Penelope Freeh, and Here We Go by Isaac Sharratt.

In addition to dancing, Nikolaus has choreographed six original works for the Minnesota Ballet and is currently Artist in Residence. He has worked as a guest dancer and choreographer in the Northern Lights Music Festival’s productions of The Merry Widow and Eugene Onegin. He has also enjoyed working as a guest artist with Dances on the Lakewalk, Sterling Silver Dance and Lake Superior Community Theater.