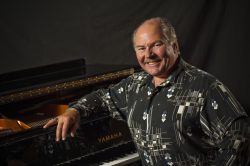 Tom grew up in Superior Wisconsin and lives in Wrenshall Minnesota with his wife Robin. He is retired after working for 39 years as a millwright, at the Potlatch/Sappi paper mill, in Cloquet MN.

Tom started playing piano at the age of three years old, and began formal lessons at the age of five and quickly advanced. Tom had over nine years of classical piano training. His biggest regret is declining an opportunity to attend Julliard School of Music in New York. To this day he sometimes wonders, “what if?”

Tom has a natural “ear” for music. He enjoys writing, arranging, and playing, as well as performing. Cawcutt has won several talent contests and awards playing the piano, as well as singing. Some of Tom’s original works include the soundtrack for the DVD “Superior Hiking Trail”, as well as writing and performing the original theme song for Bentleyville, a Christmas theme park, in Duluth Minnesota. Tom’s love for music is realized by his audiences while watching him perform live or, just listening to him on one of his five CD’s available.

Tom’s musical abilities stay fresh by performing at concerts, as well as singing and playing at community events, as well as many weddings and funerals. He can also be seen and heard at some of the local venues in the Duluth/Superior area, as well as, around Cloquet, MN.

Tom can be contacted at KeyofC@Juno.com