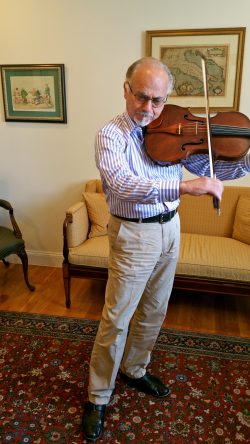 Avid chamber musician Tamás Strasser played viola with The Saint Paul Chamber Orchestra for 38 years, and since his retirement from SPCO, plays with music festivals throughout the U.S. He was previously a member of the Kansas City Philharmonic, United States Army Strings, New Art String Quartet and Concerto Soloists of Philadelphia. Strasser has performed with the Vienna Trio and the Muir, Moscow and Bakken string quartets and been a soloist with the SPCO, Kansas City Symphony among other orchestras, and the Santa Fe Opera.

He served as artist-in-residence for the North Carolina School of the Arts summer program and on the faculties of Madeline Island Music Camp and Macalester College. He has taught master classes at the University of Minnesota and Kansas City Conservatory, among others. Strasser received his bachelor’s degree from the Kansas City Conservatory and master’s degree from the Catholic University in Washington, D.C. His principal teachers were Andor Toth, Tiberius Klausner, Michael Rabin and Dorothy Delay. He serves on the faculty at the University of St. Thomas teaching violin and viola and leading the String Orchestra.