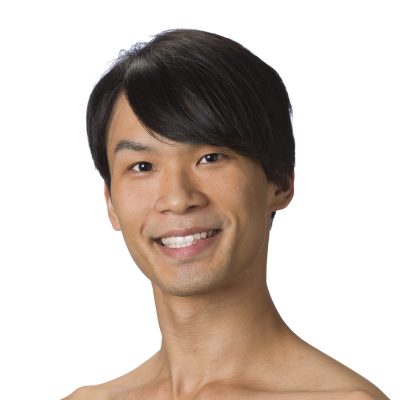 A native of Sendai, Japan, Ryo started classical ballet training at age five at Etoile Ballet School, under Misako Kawamura and Sergiy Savoschenko, and started modern ballet training at age 13 at Yuko Takahashi Dance Company. He studied at the summer intensive program of the American Ballet Theatre in New York and on scholarship at the Jacqueline Kennedy Onassis School ofAmerican Ballet Theatre, under the direction of Franco DeVita; at Manhattan Youth Ballet, under the direction of Deborah Wingert Arkin and Erin Fogarty Bittner; and at Peridance Capezio Center in New York, under the direction of Igal Perry. For the Minnesota Ballet in 2016–18 he danced in such works as George Balanchine’s Tarantella and in such roles as the Prince in Allen Fields’ The Nutcracker, Prince Ivan in Robert Gardner’s Firebird, and Prince Siegfried in Gardner’s Swan Lake. In summer 2018 Ryo was a finalist in the USA International Ballet Competition in Jackson, Mississippi. In 2018–19 he danced for Ballet West in such works as “Rubies” and “Diamonds” of Balanchine’s Jewels.