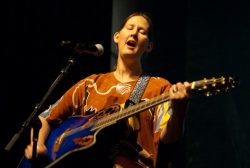 Lyz has recorded 6 CDs, had her music in local film, video and television, including the Emmy-awarded PBS documentary, “Waasa Inaabidaa”, mentored Native youth in music composition, and published children’s literature. This is all because she has a supportive, loving husband and family with three beautiful children, all from her little home on the Rez. Miigwech Manidoo!