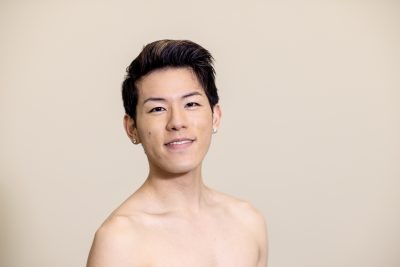 Ken Shiozawa (he/they) was born in Japan and raised in Irvine, California. He began his training at age seven at the Maple Conservatory of Dance, under the artistic direction of Charles Maple. He spent his senior year of high school attending Pittsburgh Ballet Theatre’s Full-Time Program and has attended various summer programs including Washington Ballet, Pittsburgh Ballet, Milwaukee Ballet, and Oklahoma City Ballet. In the summer of 2018, he toured and performed works in various cities throughout Eastern Europe with Butler Ballet. In May of 2020, he graduated with a BFA in Dance Performance and a minor in Psychology from Butler University and now attends the University of Wisconsin Superior as a graduate student in Clinical Mental Health.

Ken also choreographs with his most recent works being performed at the Duluth/ Superior Pride Festival and the Minnesota Ballet Summer Intensive. In 2019, he attended Regional Dance America’s National Choreography Intensive as a Project Tier Choreographer. Ken also teaches ballet, jazz and modern for the School of Minnesota Ballet and is qualified through level 6 of the RAD pedagogy.

Among his many performances, Ken’s featured roles include the Snow King in Karl von Rabenau’s Nutcracker: A Duluth Tale, a soloist in Thom Dancy and Ashley McQueen’s Beyond Self, the Bluebird in Butler Ballet’s Sleeping Beauty, and the Nutcracker Prince in Charles Maple’s Nutcracker. This will be Ken’s third season with the Minnesota Ballet as a company dancer.