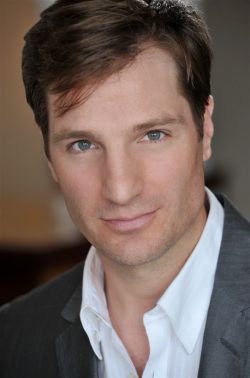 John Cudia has played some of the most famous roles in Musical Theater history and is an emerging crossover artist. He comes to Lyric Opera of the North following an engagement as Curly in Oklahoma! at Lyric Opera of Chicago.

John starred in the title role of The Phantom of the Opera on Broadway and also enjoyed a critically acclaimed run as The Phantom with the National Tour. His Broadway credits include both Phantom and Les Misérables. In fact, John holds the distinct honor of being the first and only actor to have performed as both The Phantom and Jean Valjean on Broadway. John recently played Jean Valjean in the highly successful production of Les Misérables at The Marriott Theatre in Chicago, where his performance earned him a Joseph Jefferson Award.

In concert, John has made several appearances in The Music of Andrew Lloyd Webber for Jeffrey Finn Productions and was a featured tenor soloist with the Orchestra of St. Peter by the Sea in his home state of New Jersey. John is happily married to Broadway actress Kathy Voytko and the proud father of Alena Joyce and Evelyn Rose.