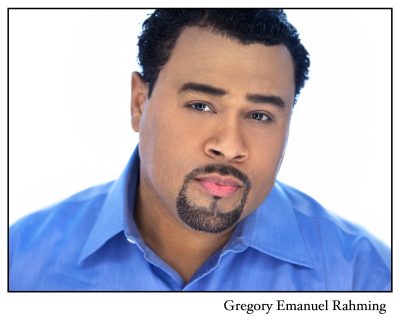 Baritone Gregory Emanuel Rahming, a native of Miami, Florida, attended Indiana University in Bloomington, Cincinnati Conservatory of Music, and the University of Miami in Coral Gables. He began his career in the Florida Grand Opera‘s Young Artist Program, culminating with the singing of the role of Masetto in Don Giovanni with the International and National casts. The following summer Gregory was awarded an Apprenticeship with the Chautauqua Opera. Mr. Rahming has been the winner of numerous competitions, including the Leontyne Price Vocal Arts Competition, Opera Index Competition, Young Patronesses Award of Miami, and National Society of Arts and Letters Competition, as well as being a finalist in the Luciano Pavarotti Competition.

Concert appearances have included the Festival of the Performing Arts at F.I.U. (Porgy and Bess); the Nashville Chamber Orchestra (Bach and Scearse); the Queen Symphony Orchestra, the Gulf Coast Symphony Orchestra and Choral Society of Greenwich Connecticut (Messiah); as well as a New Year‘s Eve Pops Celebration with the Indianapolis Symphony. In addition, Gregory has performed numerous recitals throughout the United States.

Noted as “an outstanding performer with a great gift for communication and teaching“, Gregory has participated and enjoys continued involvement with the Chamber Music Society of Lincoln Center, the New York Philharmonic, the Metropolitan Opera Guild, the New York City Opera Education Department, and the New York Festival of Song, as well as in his own Educational One Man–Opera Revue entitled “Welcome to Opera” for the Houston Grand Opera Education Department, Arts For Anyone, Connecticut Alliance for Music, Young Audiences of Connecticut, The Kentucky Center for the Arts and Louisville Central Community Center.

Mr. Rahming has served as Vocal Instructor at Sacred Heart School for the Arts, and Kentucky Country Day, along teaching private studio voice lessons. He is the Co–Founder and Artistic Director of The Mari–Ella Academy of Vocal Arts (MEAVA) and serves as Music Director for the singing group 2ND CHANCE.