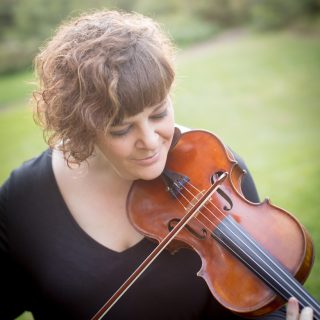 Dr. Aldridge attended Indiana University where she received her Bachelor’s degree in Violin Performance. She then went on to receive her Master’s degree and Performer’s Certificate in Chamber Music Performance from the University of Wisconsin-Milwaukee, where she was also a member of the Leonard Sorkin Institute of Chamber Music under the direction of the Fine Arts Quartet. She continued her studies at the University of Wisconsin-Madison where she received her Doctor of Musical Arts degree in Violin Performance.

Her primary teachers include Mimi Zweig, Josef Gingold, Nellie Shkolnikova, Rostaslav Dubinsky, Efim Boico, and Vartan Manoogian. Her conducting instructors include Margery Deutsch and David Becker. In 2003, Dr. Aldridge joined the music faculty at the University of Wisconsin-Superior. She serves as Professor of Violin, Director of Orchestras, and is a member of the faculty piano trio Trillium. She is also on faculty of the Indiana University Summer String Academy.

Dr. Aldridge has won numerous awards as both soloist and chamber musician and has been featured throughout Europe, South America, and the United States. She is a well sought after performer and pedagogue, and has been published in Strings Magazine.

Dr. Aldridge maintains an active performance schedule as a soloist and chamber musician. She has been a soloist with the Duluth Superior Symphony Orchestra, the Lake Superior Chamber Orchestra, the Long Prairie Chamber Orchestra, and the Itasca Symphony Orchestra. She has been a guest artist at the Indiana University Summer Music Festival, Arizona State University, DePaul University Contemporary Concert Series, Madeline Island Music Camp, Ashland Chamber Music Series with Trillium Piano Trio, National String Workshop, “Live at the Chazen” Concert Series, and has been broadcast on the BBC and Wisconsin Public Radio.

Erin is also a lover of rock and metal music and has been known from time to time, to lend her musical talents, adapting her abilities with the violin, to local bands and events that allow her to express the awesome versatility of her instrument. These include collaborations with The Three Altos, Sara Thomsen and Ryan Van Slooten.