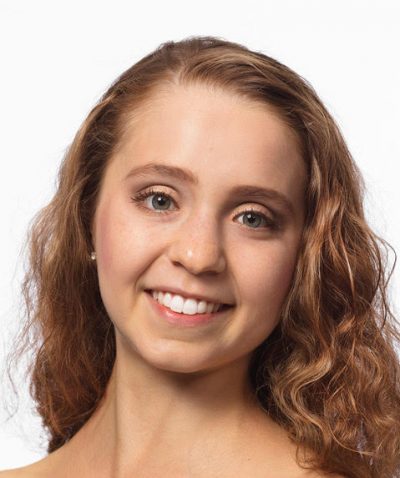 Brianna began her training at International Ballet School in Littleton, Colorado, at age 10. At 15, she was awarded the Florence Rustin Award as well as first place at the Denver Ballet Guild competition. Later that year, she was invited to attend the Ellison Ballet Professional Training Program in New York City, where she remained until graduating in 2016. In 2015 she performed in Danse Boheme at Lincoln Center during the Youth America Grand Prix Stars of Today Meet Stars of Tomorrow Gala. Brianna also attended a number of summer intensives on partial or full scholarships including Joffrey Ballet, Pittsburgh Ballet Theatre, Kaatsbaan Extreme Ballet, Ellison Ballet, and the School at Jacob’s Pillow. Brianna joined Colorado Ballet’s Studio Company in 2016 and remained there through the 2017-2018 season. During her time at Colorado Ballet, she performed various roles in the company’s major productions including a corps de ballet Swan in Swan Lake, a Flower and Snowflake in The Nutcracker, and a corps dancer in Serenade. She also danced the role of Young Girl in Michael Pink’s Dracula and one of Rosaline’s friends in Derek Deane’s Romeo and Juliet. In 2017, guest artists Jairo Heli Garcia and Paola Rubio from Crisol Dance in Guadalajara, Mexico, staged the piece RedBeat on the Studio Company. Brianna worked privately with the choreographers to perform a pas de deux. She has also guested for BRIAH Danse in Boulder, Colorado, performing a number of contemporary works, and for Atlantic City Ballet’s Swan Lake. Brianna is in her second year with the Minnesota Ballet. In 2018–19 she performed such roles as Chosen One in Robert Gardner’s Rite of Spring and grown-up Clara and Dew Drop Fairy in Allen Fields’ The Nutcracker.