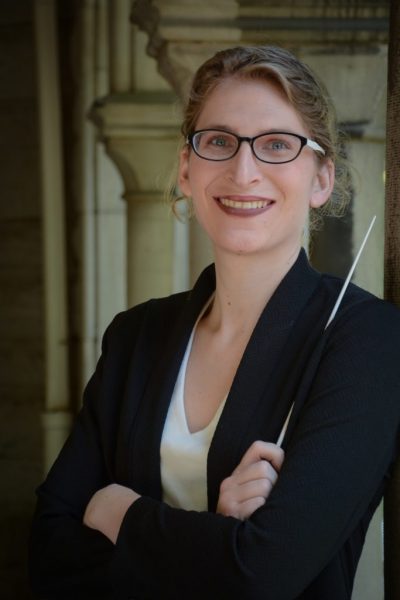 Alexandra Enyart (she/her) has been called “one of Chicago’s greatest operatic gifts” (Chicago Theatre Review) and “a podium talent to watch”(Chicago Classical Review). She’s performed with The Atlanta Opera, Opera Santa Barbara, Opera Columbus, Australian Contemporary Opera Company, Opera Orlando and many others around the country and globe. She has served as a Chicago Sinfonietta Fellow and as a “Turn the Spotlight” fellow with Chicago Opera Theatre music director, Lidiya Yankovskaya. In 2017 Alexandra won the CODA conducting competition and in 2018 she won CCM’s Mozart Overture Conducting Competition. Alexandra served as a panelist at the Opera America conference in 2021 and serves currently on the Artistic Advisory Council for American Opera Projects.

Alexandra is as comfortable on the podium as she is in the opera pit having made her international debut in Tomsk Russia with the Tomsk Philharmonic Orchestra in 2016 while finishing her Master’s in Orchestral Conducting from the University of Louisville. At the same time she also worked as the apprentice conductor with the Louisville Orchestra and Kentucky Opera as well as the Assistant Conductor for the Louisville Youth Orchestra. Alexandra works as a champion of new music and helped to bring As One, When Adonis Calls, Patience and Sarah to the stage, among many others. She also champions young singers and advocates for every voice in her work with Chicago Vocal Arts Consortium which includes productions of La finta giardiniera, Die Entführung aus dem Serail, and L’elisir d’amore with many more to come!
As a transgender conductor Alexandra strives to create a more equitable and diverse musical world. As such she successfully chartered “Faulty Systems”, an annual program in which activists and artists come together to share stories of underrepresented communities or ideas through music, speech, poetry, dance and other mediums. Alexandra also helped to launch the Chicago Vocal Arts Consortium’s sing–thru program, which functions to create an accessible space for young artists to experiment with musical styles and traditions following their education. Alexandra believes that to conduct is an honor and privilege, and continues to work to support and strengthen the musical community of which she is privileged to be a part.
DONATE