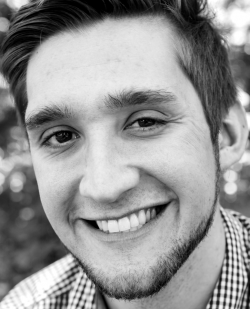 Meyer began his opera career in 2009 with chorus roles in UMD’s productions of Falstaff, and 2010’s I Pagliacci.  That summer he completed his first international tour with UMD’s Vocal Jazz Ensemble Lake Effect, singing at the International Symposium for Music Education in Beijing, China.  In Fall of 2010, Mr. Meyer won his age division in the Minnesota NATS singing competition.  The following spring, Eric was called on to sing the role of Pontius Pilate in a community production of J.S. Bach’s Johannes-Passion.  In 2011, Meyer played the role of Don Alfonso in UMD’s critically acclaimed modern interpretation of Cosi fan Tutte. More recently he’s performed in several opera scenes productions and as the bass section leader in the Duluth Superior Symphony Orchestra’s performances of Missa Solemnis and Elijah.  Currently he tours with the UMD Voyageurs in the role of the Pirate Cook.