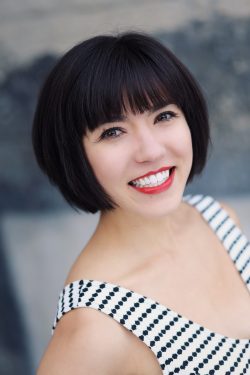 Japanese-American mezzo-soprano, Anna Hashizume, is a passionate performer.  She is recognized by her strong acting ability that comes across in all of her performances.  Originally from Minneapolis, Minnesota, Ms. Hashizume received a Bachelor of Science in vocal performance with an outside field of theatre at Indiana University’s Jacobs School of Music in 2015. At Indiana University she studied with American soprano Carol Vaness. On IU Opera Theatre’s main stage, she performed as Zulma in L’Italiana in Algeri, Meg Page in Falstaff, and was featured in the world premiere of The Tale of Lady Thi Kinh.

Ms. Hashizume now attends the University of Minnesota – Twin Cities. There she is a student of Wendy Zaro-Mullins. With the University she has performed as Mrs. McLean in Susannah, Suzuki in Madama Butterfly, Lucretia in The Rape of Lucretia, and, most recently, Zita in Gianni Schicchi. During the 2015-16 academic year, Ms. Hashizume was part of the University Chamber Singers and mounted a staged production of Bach’s St. Matthew Passion. This was a collaboration between the University of Minnesota and Hochschule für Musik in Detmold, Germany and was performed both in Minneapolis and in Detmold. That same year, Ms. Hashizume was selected to work and coach at the Minnesota Opera through a young artist collaboration between the opera center and the university. In the spring of 2016, she was also a member of an outreach program with Skylark Opera, in which she and other singers introduced young students to opera. She participated in a similar outreach program in the spring of 2017, this time in collaboration with the Twin Cities Opera Guild and the young artists of Fargo-Moorhead Opera.

In the summers, Ms. Hashizume has attended training programs such as Opera on the Avalon in St. John’s, Canada and Accademia Europea dell’Opera in Lucca, Italy. This past summer (2016), she was hired as a Festival Artist at Utah Festival Opera and Musical Theatre.

After her debut with LOON this summer, Ms. Hashizume will be returning to the Twin Cities to sing the role of Baucis in Haydn’s Philemon and Baucis with Mixed Precipitation’s Picnic Operetta